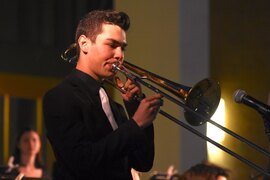 Ben Rosen  --  President
​Class of 2021
Ben Rosen is PUMPED to be President of Tri-M this year! He is a senior who plays trombone in Studio Jazz and Wind Honors, in addition to other groups outside of school. Ben also enjoys conducting and composing to give his lips a break. He is excited for the upcoming year! Contact Ben at ben@rosen4.com!

Rachel Fox  --  Co-Vice President
Class of 2021
​Rachel Fox is excited to be the Co-Vice President of Tri-M this year! This is her third year as the principal alto saxophonist in Agoura's Wind Ensemble Honors, and she has won top awards in many solo competitions and at other band festivals. She is the lead alto of a saxophone quartet that performs monthly and is one of the executive officers of the nonprofit Harmonic Youth Orchestra. Last year, she was the Tri-M treasurer and helped organize our first annual chamber concert. Outside of music, she runs the Agoura Science Olympiad team and is a co-President of Agoura's science honors society. Also, she is a multi-year varsity softball player, an academic peer tutor, a member of Link Crew, and an iOS app developer. Feel free to contact her with any ideas about chamber music, forming a group to perform at a Harmonic Youth Orchestra concert, nerding out about classical music, or anything in general at foxr8@outlook.com!

Vibiana Cardenas  --  Co-Vice President
​Class of 2021
Vibiana is thrilled to be the Co-Vice President of Tri-M this year! She has been playing music since she was five years old, starting with piano and violin. It was not until middle school that she decided to play the viola. She has taken part in Certificate of Merit, received many honor awards, and has been invited to the Music Teacher's Association's Honors Orchestra and solo performance. She is participating in many orchestras such as the CSUN Philharmonic Orchestra, the Colburn Youth Orchestra, and the Idyllwild Chamber Intensive Summer Festival Program. She has also had the opportunity to attend the All-State Symphony Orchestra for two years. She loves to play and spread joy in her community and has become an officer for a non-profit organization, Harmonic Youth Orchestra. Vibiana is excited to play with the musical community at Agoura. You can contact Vibiana at vibiacarde6003@student.lvusd.org!

Jacqueline Fox  --  Secretary
​Class of 2021
Jacqueline is elated to be the Secretary of Tri-M this year! She has been playing the flute and piccolo for nine years, and this will be her second year in Wind Ensemble Honors. She enjoys performing concerts for the nonprofit Harmonic Youth Orchestra and has also started singing at these concerts. Outside of music, she is a four-year member on Agoura's competitive dance team, a member of Link Crew, and the co-creator of a food blog called thefoodiefox.com. She is also passionate about social media and marketing, and she runs many club and organization instagram accounts. Contact Jacqueline at foxj8@outlook.com!

Connor Miller  --  Historian
​Class of 2021
Connor is overjoyed to be the Historian of Tri-M this year! He plays Double Bass in Studio Jazz and Flute in Wind Ensemble Honors. He has been playing double bass, electric bass, flute, and piccolo for 7 years. He is planning to pursue a Music Business Major in college. Feel free to contact Connor at connorbondmiller9@gmail.com!